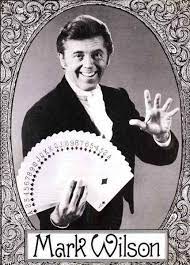 I first saw magic as a child on the Ed Sullivan Show and Mark Wilson’s, The Magic Land of Allakazam. To say it fascinated me was an understatement. At that time, when you saw a magician perform on TV, it happened once and there was no possibility of seeing it again and again, as the curious can do now. (The super curious can now examine a performance frame by frame!)

Living in a small town in Massachusetts, I visited the library to read every book available about magic and magicians. The reading was exciting to a young child, but the secrets I was hoping to find were not at The Public Library.

So, my life moved forward with interests in drawing, painting and studies in music. Magic took a back seat. In fact, it was out of my life, and I had no expectation of its return.

Life goes on and we get married, have kids, work, get divorced, etc. During this period, something changed dramatically in the World of Magic with the arrival of Doug Henning and his Broadway debut in “The Magic Show”.

As a young man, Doug had brought magic to a new generation, as the Beatles had done with music. Gone were the stereotypes of how a magician would perform or dress. It brought a renewed interest to me.

I was always on the lookout at bookstores for books on Magic, but the pickings were slim as there were many books on puzzles, and those on magic were few. I had not yet discovered The Magic Shops in Boston.

My first discovery of a magic book, published for lay people, was “The Complete Illustrated Book of Card Magic” by Walter Gibson. This brought me hours of delight, reading and practicing card magic. I also discovered some secrets I was searching for as a young child.