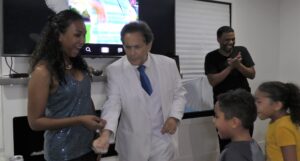 My magic performances are Mix and Mingle (Strolling/ Walk around Magic) for most venues. For example, Holiday parties, weddings, cocktail performances and adult birthday parties. Although I am thoroughly rehearsed, my performances appear impromptu because of the close and natural interactions with my audience.

What is a Parlor Show?

I had no intention of moving up to the stage. So I made a compromise. It all came out of an inquiry to do a formal parlor Magic show. Are there benefits? Well yes, it gives me another opportunity to perform Magic in a unique style which is very satisfying. I still interact with my audience. Whether Strolling or The Intimate Parlor Show, they both feature Close-Up Magic.

I drew from some of my significant influences and put together a show which combines Magic and Laughter, but most of all, continued interaction with my audience.

The show is getting great reactions, but I am not done. I continue making adjustments. The foundation is sound. Still, I will vary a few pieces in search of the strongest magic show I can present.

The last result will come from many performances. Honing everything, including the comedy. Listening to my audience is my ultimate aid.

Blog for magicians only:

When you hang out with fellow magicians, many discussions take place. Sometimes opinions get a little heated. I come from the school that considers laypeople intelligent. Others argue laypeople don’t care about methods, they just want to be entertained.

Well, just for argument’s sake, let us assume we are all equally entertaining. Then the superior performer is the one who employs the best Method and technique.

I know magicians who stop short of perfecting their sleights. “laypeople, don’t care.”… but they are not stupid. Poor technique sticks out like a sore thumb. Good to excellent technique is invisible.

For a simple example, take Doc Daley’s Last Trick. Some magicians fumble with their double turnover technique. If you are using a poor technique, at least take the time to hide the obvious get ready.

If you are guilty of this, your audience will not be totally sure of the placement of the Black aces and the red aces. When you arouse suspicion, your spectators may not know what happened, but they know something happened,which is just as bad as knowing what happened. The result is a diminished reaction as the magic is missing. You simply have no effect. With flawless technique and structured routining, the sleights are invisible and you will have a “killer effect.”

Darwin Ortiz reminds us, “That before you change an apple into an orange, make sure the audience knows it’s an apple.” In Daley’s effect, you must come as close to conviction of the placement of the cards as possible. If you fumble with the cards, you won’t come close to clarity or conviction.

The Market for easy tricks or self-working.

Magicians are constantly putting out effects which are easy to do. Some of these are good, while most of them pay a price for their simplification. Sometimes you just have to put in the work. Here’s a quote from Darwin’s book Strong Magic. On the cost of taking the easy way out…

Sometimes you just have to put in the work.

Contact Joe Ferranti to find out how he can make your next event memorable and magical.